InstaVolt’s Banbury hub just off M40 opens ahead of schedule 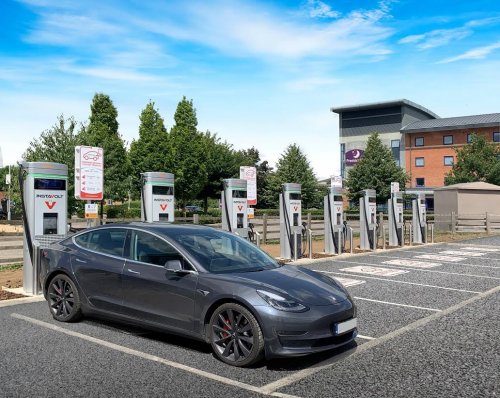 One of the UK’s largest rapid charging hubs at Banbury just off the M40, has opened three weeks ahead of schedule providing much needed electric vehicle charging infrastructure on the country’s strategic road network.

Located just off the motorway at Junction 11, drivers will be able to charge their EVs using eight state of the art CPE250 high powered chargers while enjoying on-site facilities including Costa Coffee and a Miller and Carter steakhouse.

Adrian Keen, CEO of InstaVolt, said: “Despite the recent pandemic I’m delighted that we’ve been able to open the Banbury hub ahead of schedule having only commenced construction in May this year. It demonstrates the hard work and professionalism of our team of project managers and engineers who have worked around the clock to deliver this key infrastructure project.”

He added: “Strategically Banbury Hub is very important to us as it sits just off one of the country’s busiest motorways, serving London in one direction and the UK’s second city Birmingham, in the other. It will also be particularly welcome to EV drivers who are enjoying holidays at home this year and can travel with the confidence that they’ll be able to charge whilst out and about”

“A lack of charging infrastructure on the country’s motorways is often cited as a concern for current and prospective EV drivers. We are solving that problem by deploying chargers where drivers need them most by developing sites up and down the road network just a few hundred metres from motorway junctions.”

Victoria Prentis, MP for North Oxfordshire, said: “I am so pleased to see North Oxfordshire leading the way as we become more eco-friendly, with InstaVolt delivering eight rapid chargers ahead of schedule. Climate change is one of the most important challenges we face today.”

Prentis, also serves as the Parliamentary Under Secretary of State in Defra, added. “We have some ambitious targets to reach by 2050. Improving access to charging points so more people can consider an electric vehicle to reduce emissions on our roads is a step in the right direction.”

InstaVolt has built its reputation on the philosophy that charging an electric vehicle should be quick and easy which is why, unlike many other companies, InstaVolt operates an ‘open charger’ model, so anyone can use its charging points on a pay-as-you-go basis. No monthly subscription and no membership cards are required with drivers just needing a contactless payment card to start a charging session.

The accolade adds to the recognition that InstaVolt earned in the Zap-Map survey where, for the second year running, electric car drivers across the county named InstaVolt as their favourite charging network for multiple brands.